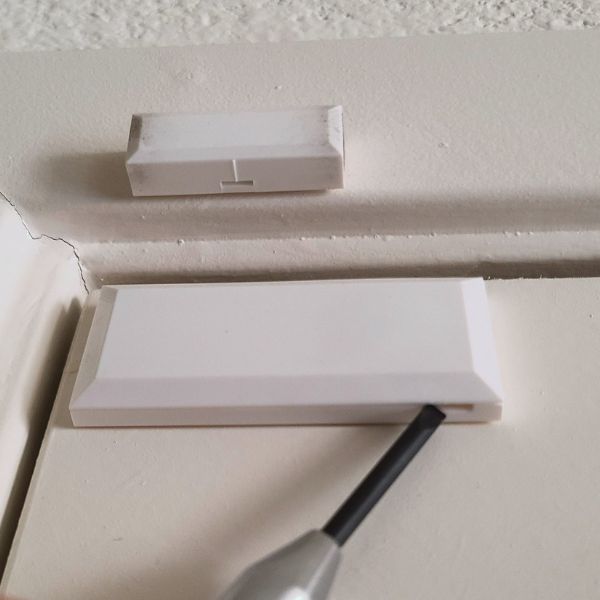 Recently, our DSC alarm system started showing a low battery warning. On our keypad, you can scroll through the different warnings item by item. I found that two of our door sensors had low battery conditions. It was clearly time to perform a DSC sensor battery replacement.

Which Battery to Use

Normally when I replace coin cell batteries, I just grab a few at the dollar store. For something as important as our alarm sensors, I decided it was worth getting a better battery. I picked up a 12 pack of CR2032 batteries at Costco for $12.

Popping the cover off of our sensors was rather easy. I placed a small slotted precision screwdriver carefully placed in the provided slots, and applied a gentle twist. The cover popped right off, exposing the coin cell battery.

I used the same screwdriver to gently pry the battery out of its socket, and replaced it with a new one. Snap the cover back on, and voila! That’s what I thought, anyway.

I was unable to find any indication as to why the sensor would indicate it was being tampered with. It made sense to show tamper warnings while the cover was off, but I had already put it back together. I closed the door and went back to the keypad to do some troubleshooting.

Make Sure You Finish the Process

The important thing to remember here when performing a DSC sensor battery replacement is that you need to actually close the zone you’re replacing the battery for. Once you replace the battery, the low battery warning will disappear. This makes sense. However, the alarm still doesn’t know that the sensor is working properly. It has no way of knowing that until you close the door.

The process isn’t complete until you close the door (or window), so that the alarm can see the sensor is working properly.